Below are two photos of comet 67P/Churyumov- Gerasimenko. The first is a close-up of the so called body, the second is a portion of the head. These two areas have numerous matching points showing that they were once joined together. It therefore follows that 67P/C-G was once a single body that has since been stretched, resulting in the two lobes we see today.

67P/C-G is therefore not a contact binary as has been suggested. Nor is it an unstretched single body that has been eroded to form the separate head and body.

As it’s clear the comet was stretched, it must have been subjected to one of two scenarios. It either underwent a close approach to Jupiter under the Roche limit in the distant past or it underwent spin-up to around a 90-120 minute rotation period which would overcome its gravitational pull. The former scenario would need to allow stretching without breaking up as Shoemaker-Levy 9 did on passing Jupiter, so possibly between 115,000 and 135,000 km above Jovicentre. The latter scenario might occur due to asymmetrical outgassing and would suggest a spin back down from the ~2 hour rotation to its current 12.4 hour rotation period. A close approach to another planet on its way in from the Kuiper belt is possible but much less likely than a close encounter with Jupiter.

Since the two photos show portions of the head and body that once fitted together, it follows that they are mirror images of each other. They exhibit a geological line formation tracing a convoluted path which is faithfully reproduced in both photos. 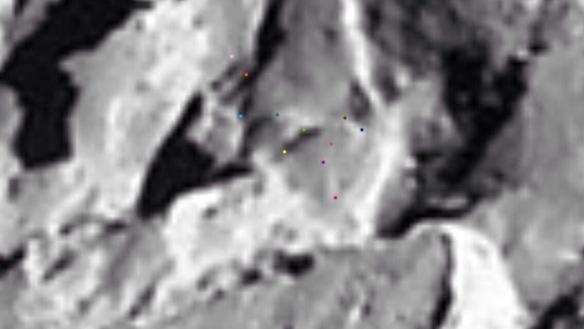 These two portions of the head and body of the comet already showed multiple matching features both in the areas shown annotated in close-up and in their immediate vicinity. The matches even occur in three dimensions, for example, the finger-like protrusion in the cliff face under the head (almost reaching the yellow dot) fits neatly into a U-shaped cove below its counterpart yellow dot on the body. Also, just to the left of the finger-like protrusion there is a set of nested curves. These fit to nested curves in the body. These are just above/below the fuchsia dot in both cases. Although these matching protrusions are easily discernible in the head photo above, it is easier to see in the two annotated photos at the bottom of this post. In this case yellow dots denote the finger protrusion and its U-shaped counterpart. Terracotta dots denote the nested steps on the body photo (the steps are only visible on the neck portion in the neck photo above. They are to the left of the finger, above the fuchsia dot and not annotated so as to avoid confusion with the other dots in that photo).

Another example of the head/body fits matching in three dimensions is found with the annotated wavy line itself. It doesn’t just match in plan view: the edge of the cliff along which it meanders is pushed up in a frill. That frill seats against a very low, bulbous ridge on the body where its corresponding wavy line sits. Also, the sections running at 90 degrees to the pink dot nest together in the third dimension.

There are many other matches between head and body along the ridge that forms the base of the ‘neck’. The above matches are simply the most compelling ones.

The photos from which the annotated close-ups were taken are below. For orientation on the body photo, the first dot (pink in the close-up) would be sited at the end of the deeply shadowed ridge that’s shaped like an elongated question mark. From there, two triangles that are point-to-point are what constitute the main part of the close-up.

2) Bill Harris who posted the photo of the body portion on the Rosetta blog in the comments on this post:

Additional annotated photos as described above: 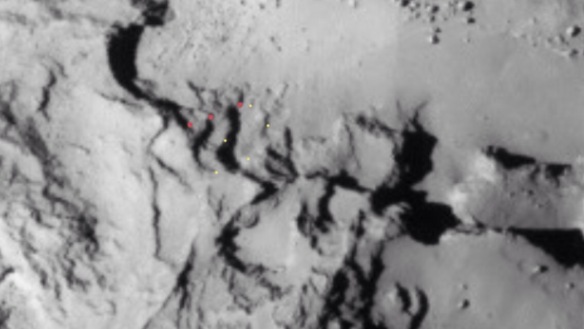 13 thoughts on “67P/Churyumov-Gerasimenko. A single body that has been stretched- Part 1”